Tonight in the park in downtown Lake City at 8:30, the Hardrock Revision team will be projecting images of the mine and our work so far. Grant Pound will be talking about our project, and I'll be speaking about the history of the Ute Ulay mine. 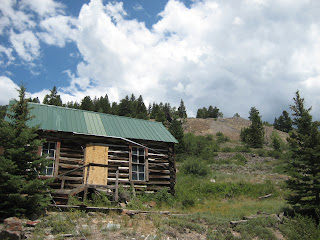 Credit goes to VISTA Casey Carrigan, who put together a very nice history of the mine this spring, which I am drawing from heavily in this synopsis.

Prehistory of the Ute Ulay
Before the two veins at the Ute Ulay were first claimed in 1871, a great deal had already taken place. Present-day Colorado had long been Ute territory. Trade and conflict between the Utes and the Spanish began around 1600, and continued into the 19th century, when Mexico won its independence from Spain in 1821. The United States claimed the Northern Rockies in the Louisiana Purchase in 1803, and southern Colorado after the Mexican War in 1848.

In the 1830s, the first prospectors were exploring the American West, and the gold rush hit Colorado in 1859. Silver was also discovered in Colorado in the 1860s, but prices were low and silver mining was nowhere near as profitable and exciting as the search for gold.

U.S. expansion, mineral extraction, and displacement of Native Americans were concurrent in the West in this era. In 1861, Colorado became a U.S. territory, and soon after fought a war largely on the eastern plains against the Kiowa, Comanche, Arapaho, and Cheyenne.

Seeking to recover from its Civil War debt and drive Western expansion, the Federal Government introduced the 1866 Lode Law, which opened federal lands to private lode mining and mineral claims. Just two years later, in 1868, they signed a treaty with the Utes, marking the western third of Colorado as reservation land.

1871 to 1900: Boom and Bust
Mining took off in Southern Colorado after the 1873 Brunot Treaty, which ceded the San Juans from the Utes to the U.S. In 1874, the Ute Ulay claims were formally located, and just two years later, as Colorado became a state in 1876, the mine received its first influx of eastern investment when the Crooke Brothers bought the mine. Its economy tied to the mine, Lake City boomed as well, boasting a population of 4,000 downtown, and another 2,000 in the "suburbs" that year.

In 1878, the value of silver went up with the passage of the Bland-Allison Act, requiring the U.S. Treasury to buy silver coinage. At the Ute Ulay, the mill was constructed, as well as miner's quarters and other structures on the property. Yet a bust came soon after, as the ore was not as deep as originally thought. Meanwhile, the Colorado silver boom officially began in 1879 with the discovery of the lode at Leadville.

In the 1880s, the Ute Ulay boomed and busted. The hopes of a railroad coming in spurred the construction of a larger mill and the dam on Henson Creek, before the company defaulted on their mortgage in 1884 and sold the mine to the Lake City Mining Company. It reopened in 1887 and boomed again in 1889 when the Denver & Rio Grande Railroad came to Lake City.

The 1890s followed the same cycles of boom and bust, more severely as the value of silver was artificially elevated in 1890, then crashed in the panic and depression of 1893. The Ute Ulay was sold, leased, defaulted, and leased again before 1899, when 80 Italian miners, unionized under the Western Federation of Miners, went on strike. After they surrendered, they were promptly fired. In all of this tumult, between 1874 and 1900, the Ute Ulay had produced $12 million in silver and lead.

20th Century to the Present
The life of the mine in the 20th century was marked by changes in ownership and improvements to the property, but very little mining. Between 1900 and 1933, when the Denver and Rio Grande railroad abandoned Lake City as the U.S. plunged deeper into the Great Depression, the Ute Ulay was bought and leased twice.

The increased need for minerals brought by World War II lead to the mining of the Ute shaft in 1939, but the cycles of turnover continued into the 1950s, when the flume from the dam collapsed, and the mine was closed and much of the equipment transported to Ouray. Finally, in 1983, the mine site was purchased for milling purposes by its current owner, LKA International, Inc.

In 2009, the Division of Reclamation, Mining, and Safety did a $1.2 million cleanup of the tailings piles above Henson Creek. In July 2011, the Hardrock Revision team arrived in Lake City.
Posted by Julia Mavis